Armenia had to contend with large-scale corruption and anarchy in the political system in the first years after the declaration of independence in 1991. Elections were accompanied by suspicions of fraud. The political elite was guilty of corruption and mismanagement during this period. She was even responsible for a series of assassinations of politicians and prominent journalists. The parliament worked very slowly and until 1994 an important part of the legislation from the Soviet period had not yet been replaced. Moreover, since 1988 Armenia had been involved in a war with Azerbaijan for the Armenian enclave of Nagorno-Karabakh. In this chaotic situation, organized crime gained influence, the number of minor crimes rose sharply and corruption only increased.
In Nagorno-Karabakh itself opinions are divided on a future status. Some residents want to join Armenia, others prefer their own independent state for the approximately 100,000 inhabitants of Nagorno-Karabakh. Already in 1991 it proclaimed itself an independent republic, but it was not recognized by any state.

The Nagorno-Karabakh enclave is a region in Azerbaijan where a very large Armenian majority (80%) lives. Already in the early twentieth century there was an armed struggle between separatist Armenian movements and the Azerbaijani authorities. The Armenians in Nagorno-Karabakh strive for independence or joining Armenia. In 1988 this became a real war in which the Armenian Republic was also involved. In the enclave of Nagorno-Karabakh mass slaughter took place and in the capitals of Yerevan (Armenia) and Baku (Azerbaijan) the local population started a massacre among the Azerbaijani and Armenian minorities respectively.

Although a cease-fire was agreed between both parties in 1994, violence continues in and around the enclave. For the time being, Armenian troops occupy large parts of Azerbaijani territory. In Nagorno-Karabakh itself almost the entire male population between 17 and 45 years old is being mobilized for the fight against the Azerbaijans.

Despite many mediation efforts by both the CSCE (Conference for Security and Cooperation in Europe, later -from 1995- Organization for Security and Cooperation in Europe) and Russian and Western diplomats, there is still no solution to the conflict. Azerbaijan is not at all prepared to hand over Nagorno-Karabakh to Armenia or to grant it independence. Armenia maintains its troops in western parts of Azerbaijan and continues to support Nagorno-Karabakh militarily.

From 1994 the political and economic situation improved. Crime rates were falling and were even the lowest in the Caucasus. Moreover, the board gradually began to work more efficiently and the corruption among politicians and police remarkably decreased. The parliamentary elections held in 1999 went without any notable irregularities. The termination of the war with Azerbaijan for the Nagorno-Karabakh enclave also brought Armenian society into calm waters. In 1994 a cease-fire was declared. Armenian troops still occupy western parts of Azerbaijan and there are still occasional acts of violence, but there is no question of war anymore.

In 1998, Robert Kotsjarian became President of Armenia. Kotsjarian comes from the Nagorno-Karabakh region. He was therefore seen as the man who could solve the long-standing conflict around the enclave. He has not succeeded so far. However, Armenia joined the Council of Europe in 2001.

In 2003, Kotsjarian was re-elected president. The opposition accused him of fraud and decided to challenge the outcome. The higher court ruled that there was indeed fraud, but also ruled that Kotsjarian did not owe his victory to this. He did have to ask the population in a referendum if they agreed with his election. Kotsjarian has ignored that decision

In the presidential election in 2008, Prime Minister Serzj Sarkisian was elected president in the first round for a term of five years. The opposition complained about fraud and irregularities. Also, riots broke out at various places in the country. However, according to OSCE international observers, the elections generally went according to international rules.

In May 2012, parliamentary elections took place in Armenia. Given the unrest of four years earlier, these elections were seen as an important sample to gauge the level of democracy in the country. The elections were won by the political party of the incumbent president Sarkisian. International observers from the OSCE praised the government for “open and peaceful” elections. However, this time it was also pointed out some fraud cases and rumbling with electoral lists.

It is estimated that about 60% of the total of eight million Armenians live outside the country itself. Armenian communities are mainly found in Russia, the United States, Georgia, Turkey, France, Iran, Lebanon, Syria, Argentina and Canada. Famous persons of Armenian origin are for example the American tennis player Andre Agassi, the French chansonnier Charles Aznavour and the American singer Cher. 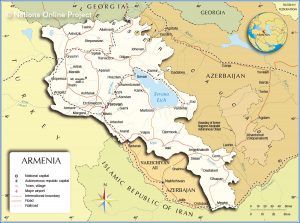 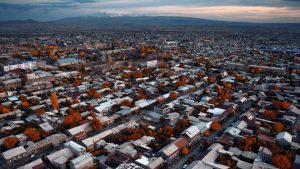